The Volcano World Cup: A Competition With A Big Bang! 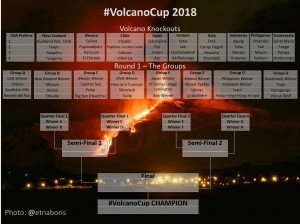 Which exploding mountain would make your gold, silver and bronze? The largest eruption? The most popular or famous? The most active? Or even the hardest one to pronounce (like Iceland’s Eyjafjallajökull?). In a social media driven competition that is the brain child of Dr Janine Krippner, the Volcano World Cup has got the volcanic community busy championing their favourites with facts figures and fantastic photos. #VolcanoCup, is a bit of fun that has turned into a great social media experiment that provides a learning ground about some of the most iconic volcanoes of the world. Here some 52 volcanoes are virtually fighting it out for the accolade of being top dog, the winner of the Volcano Cup.
Like any cup competition there are hard fought qualifying heats with big hitters and underdogs. In this case these are done per country, and in the case of the US they had their own internal heats before their top four were put through to the next stage. This may seem somewhat unfair as countries like Italy and Iceland get only one heat while others get to battle out more than once. It’s all down to how many volcanoes you have? The USA heat saw 16 volcanoes down to 4 with heat winners Mt. St. Helens, Mt Rainier, Crater Lake and Kilauea (Hawaii) making it through to the knockout heat, with Mt St Helens taking the USA crown. Then came the likes of New Zealand (with vocanoes like Ruapehu and Taupo), Mexico (with Colima and Popocatépetl), Iceland (with Eyjafjallajökull and Laki), and Japan (with Fuji and Unzen) all proving a hot bed for experts trading facts and pictures to tempt all to vote for their favourite. It really is like a global game of volcano top trumps!
For me one of the hardest round so far has been Italy. Some real giants among the volcano world all in one hat; Vesuvius, Etna; Stromboli and Campi Flegrei. These volcanoes have provided some of the best historical accounts of volcanic events (e.g. the AD 79 eruption of Vesuvius that buried Pompeii and Herculaneum), the volcano with the longest historical record of eruptions (Mt Etna) and the ever reliable ‘Light house of the Mediterranean’ (Stromboli), with its mesmerizing metronomical eruptions you can almost set your watch to. For me I was always going to vote for Stromboli, as it’s the most complete volcano package have ever had the pleasure to visit and my personal favorite, but alas Etna won beating Vesuvius by only 1% in the voting. This was always going to be tough, but also exciting to see how everyone views the volcanoes in their back garden and the ones from distant lands, and the factoids ohhhhhhhh there are some real gems out there (see the feed detail at #VolcanoCup). It’s really becoming a great place to learn about the worlds fiery mountains, with volcano facts galore.
So the volcano world cup moves on at a pace and soon we will have different countries winners pitched up against each other to break through to the quarterfinals, semis and the grand finally. Just which firecracker will be the champion volcano? With so many iconic mountains that probably all should be in the final if not win it, there will only be space for two finalists and one winner. But YOU get to choose and vote as the whole thing is open to all. Take a look at the twitter feed #VolcanoCup and look out for the rounds where you can click in your vote. Soak in the wonderful facts being spouted by volcano experts and interested armatures from around the world, and loose yourself, with a coffee in hand, to a beautiful volcano far far away that just might be the next world champion at the volcano world cup.
By Dougal Jerram|2018-02-16T11:28:34+00:00February 16th, 2018|Volcanic Rocks|0 Comments

This site uses Akismet to reduce spam. Learn how your comment data is processed.